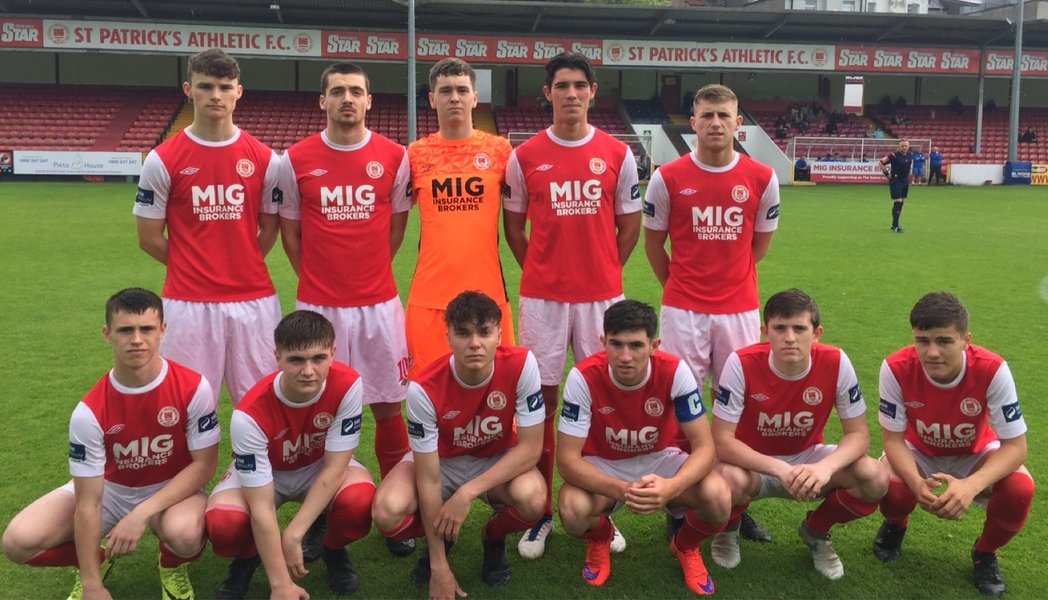 3 Out Of 3 For Underage Pat's Sides At The Weekend

It was another successful weekend for the underage sides of St Patrick's Athletic as all three sides picked up victories.

Beginning with the under 19's, they recorded an important 1-0 win against Finn Harps in Richmond Park as skipper Luke Heaney's headed effort was all that separated the sides. The victory over Harps was important as the U19's made up ground on the SSE Airtricity League Under-19 Northern Division pacesetters, and continues a good run of form for Darius Kearns St Pat's side.

Luke HeeneyÃƒÆ'Ã‚Â¢ÃƒÂ¢Ã¢â‚¬Å¡Ã‚Â¬ÃƒÂ¢Ã¢â‚¬Å¾Ã‚Â¢s header secured another 1-0 win for our U19s earlier. The boys beat Finn Harps at Richmond Park and remain at the top of the table. ItÃƒÆ'Ã‚Â¢ÃƒÂ¢Ã¢â‚¬Å¡Ã‚Â¬ÃƒÂ¢Ã¢â‚¬Å¾Ã‚Â¢s the second time in a week that the captain has scored the winner in a 1-0 victory ÃƒÆ'Ã‚Â°Ãƒâ€¦Ã‚Â¸"Ãƒâ€šÃ‚Â´ÃƒÆ'Ã‚Â¢Ãƒâ€¦Ã‚Â¡Ãƒâ€šÃ‚ÂªÃƒÆ'Ã‚Â¯Ãƒâ€šÃ‚Â¸Ãƒâ€šÃ‚ÂÃƒÆ'Ã‚Â¢Ãƒâ€¦Ã‚Â¡Ãƒâ€šÃ‚Â½ÃƒÆ'Ã‚Â¯Ãƒâ€šÃ‚Â¸Ãƒâ€šÃ‚Â pic.twitter.com/ItGPgvGvbY

The Saints' U17 side made it two wins out of two over the weekend against Finn Harps as they made the long journey with a 1-0 win thanks to a Brandom Bermingham goal from the penalty spot as Jamie Moore's side continue to compete at the top of the table.

St Pat's U15 side also had a long trip to make over the weekend as they were away to Derry City and they too recorded a 1-0 win as Republic of Ireland underage international Ben McCormack scored the winner to ensure the Saints stay top of Group 1 of the SSE Airtricity Under-15 League.

Great win on the road for our U15s today. Ben McCormack got the only goal to seal a 1-0 win away to Derry City pic.twitter.com/n2aLuwGCWx

Finally there was more good news recently as Saints' midfielder Brandon Holt played for the Republic of Ireland U16 side managed by Pat's legened Paul Osam in the Uefa Development tournament in Sweden. The youngster made appearances against Sweden and Austria which the Republic lost, however Brandon also started in the victory over Turkey.

All at St Patrick's Athletic FC would like to congratulate Brandon on representing his country once more.