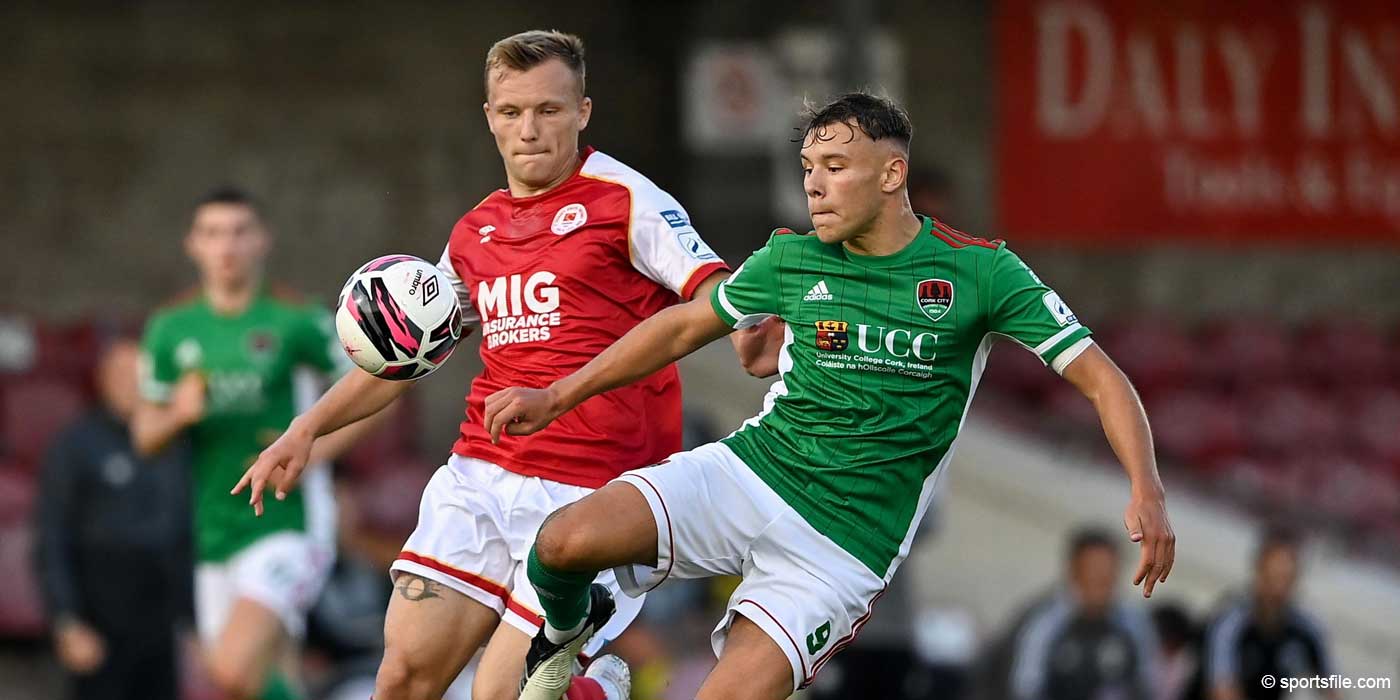 St Patrick's Athletic booked their place in the FAI cup quarter finals after a dramatic 1-1 draw with Cork City ended with the Saints winning 4-1 on penalties.

Chris Forrester's penalty one minute from time looked to have snatched victory but Barry Coffey's late goal deep into injury time rescued a draw for The Leesiders.

The sides could not be separated after extra time and four perfect penalties from Chris Forrester, Ben McCormack, Jay McClelland and Alfie Lewis, as well as a brilliant Jaros save sent The Saints marching on to the quarter finals after a titanic battle.

There were a number of changes to the St Patrick's Athletic side who were beaten by Finn Harps last weekend with Jamie Lennon, Darragh Burns and Ronan Coughlan all returning to the starting 11 while there were first ever starts for Jack Hickman and James Abankwah.

It was an even opening 20 minutes with both sides quite shy in going forward and as a result, chances were few and far between.

Cork City did have half a chance when Barry Coffey floated a corner into the box but the ball was inches over the head of Darragh Crowley who was arriving from deep.

It seemed any early chances would be from a set piece and Cork did have two more dangerous corners with George Heaven's their main one as his glancing header floated just wide of the target.

St Pat's picked it up a gear and they controlled most of the possession in the closing 20 minutes of the first half, and on the 40 minute mark, they almost took the lead. Jay McClelland's deep corner looked as if it had snook in but for a brilliant Cian Coleman header off the line.

Cork City cleared, but only as far as Darragh Burns who did excellently to float in a beautiful ball from the right hand side which agonisingly sailed across the face of the goal and out for a goal kick.

Just before Derek Tomney's half-time whistle, Cork City almost took the lead. Beineon O'Brien Whitmarsh broke down the right hand side and his cut-back fell right into the path of Cian Murphy who had the goal at his mercy but his weak shot was comfortably saved by Vitezslav Jaros in what was the final action of an even first half.

Cork City looked the more dangerous of the sides in the opening exchanges of the second-half, and seven minutes in, Jaros pulled off a brilliant save. Dylan McGlade's audacious effort from nearly 30 yards out had a few Saints fans worried for a split second, but Jaros did brilliantly to tip the effort over the bar. Cork did whip in a few dangerous balls after McGlade's effort but the Saints eventually cleared when Jaros comfortably gathered Murphy's tame header.

Chances dried up for a period of the second-half. Jamie Lennon's stinging long range effort which was straight at Cork City keeper Mark McNulty was the pick of The Saints' chances while Cork did have a few half chances, mainly from set pieces but as we approached the 85th minute mark, it looked destined for extra time.

However, as has been the story throughout The Saints campaign this season, there was late drama, and plenty of it.

Six minutes from time, Billy King's deflected cross fell to feet of Ben McCormack who did superbly to get his shot away on the turn and his effort had McNulty at full stretch to tip the effort out for a corner as The Saints desperately looked to break the deadlock.

Just two minutes later and with four minutes remaining, McCormack won a penalty. His darting run at the heart of the Cork City defence was eventually ended by a George Heaven tackle inside the penalty area and after consultation with his linesman, Tomney pointed to the spot. Heaven limped off the field after the tackle and after some deliberations and protests from the Cork players, Chris Forrester eventually converted the penalty. With one minute of normal time remaining, St Pat's looked to have snatched victory.

Cork City threw everything at the game in a desperate attempt to equalise, and on the 94th minute, they were rewarded for their efforts. Cian Coleman headed a deep cross back across the face of the goal and Barry Coffey was on the end of the Coleman header to tap into an empty net to rescue a draw for Cork, and bring the game to extra time. It proved to be virtually the last kick of normal time as we headed for extra time at Turners Cross.

Surprisingly, despite all the drama during the game, extra time was extremely tense and chances dried up. It was an even contest in extra time, but both teams just struggled to create that finishing product. Jay McClelland's driven shot which deflected just wide and a Billy King cross which landed into the six yard box, but was eventually cleared, proved to be the only half chances of a cagey 30 minutes, as the game headed for penalties.

Chris Forrester stepped up first for his second penalty of the night and he calmly slotted past McNulty again. McGlade was next for Cork and his shot was just out of reach for Jaros and into the net. Ben McCormack drove straight down the middle past McNulty, but Barry Coffey hit his penalty over the bar, leaving it at 2-1. Jay McClelland stepped up and he slid it into the left corner before Jaros did excellently to save Darragh Crowley's penalty. Alfie Lewis stepped forward for the deciding penalty and he coolly converted into the left corner, sending The Saints through to the quarter finals after a dramatic ending to an entertaining game.

The Saints are back in league action next Friday night when they welcome Longford to Richmond Park, with a kick off time of 7.45pm.