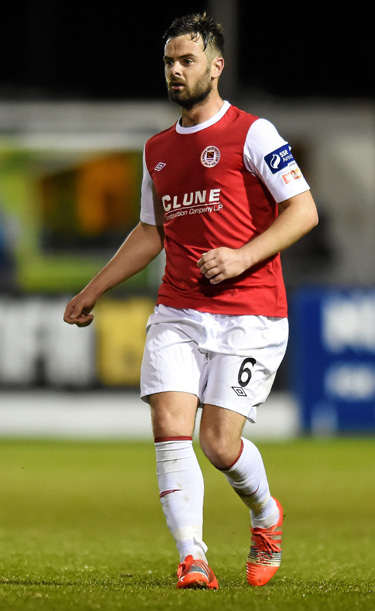 Sponsored by: All Saints Show

25 year old Bolger joined St Pat's in 2012 as Liam Buckley saw the Wexford as a key player in the make-up of his side.

Having been known in the past to be a hot headed player, Bolger has matured in his time with the club to now be one of the best players in the League of Ireland.

Football began for Greg with local side New Ross Celtic, before he was picked up by Mick Wallace’s Wexford Youths side. Bolger had a change of scenery for a year as he joined Cherry Orchard, but it was there that he was spotted by UCD.

Having featured sparingly initially under Pete Mahon’s final season which ended in relegation, Bolger was immediately made a regular by new UCD boss Martin Russell. Lining up with Ronan Finn and Paul Corry in midfield, Bolger helped UCD win the 2009 First Division and earn promotion back to the Premier Division.

After a successful season of consolidation in 2010, Bolger accepted a move from UCD to Liam Buckley’s Sporting Fingal for the 2011 season. However Bolger’s future was immediately thrown into doubt as after only a matter of 4 weeks with Fingal, he was left in limbo as the club went out of business.

Luckily Bolger found a new club quickly as Ian Foster’s Dundalk moved for his services. Bolger appeared 24 times that year, though his time with the Lilywhites was hampered with injuries and disciplinary issues on the field. But when Buckley came calling again, this time as Saints’ manager, he needed little convincing to join.

Bolger impressed greatly in his first season at Pats, excelling in the Saints’ European campaign. However 2013 would see the Wexford man reach new heights as he showed both his ability to win possession and his great passing ability on a weekly basis.

Greg however will always be remembered for his stunning 25 yard screamer in the league defining game against Sligo Rovers in Richmond Park – a goal which won Bolger the RTÉ MNS Goal of the Season, and that helped the Saints on their way to claim the league title. Bolger was also named 2013 St Patrick’s Athletic Player of the Year, while he also earned a place in the PFAI Team of the Year.