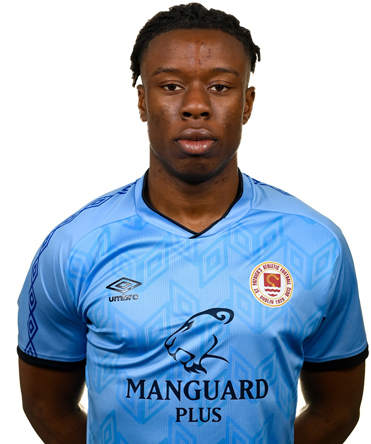 David joined St Pat's at the start of 2022 and first season at the club saw him initially fighting it out with West Ham loanee Joseph Anang for the number 1 spot, before an unfortunate ankle injury kept him out of action as Danny Rogers joined in the summer window.

The Ireland U20 international made two competitive appearances for the Super Saints during the 2022 season, starting the final two league games of the campaign away to Sligo Rovers in a 1-0 defeat and at home to Shelbourne in a 4-0 victory on the last night of the season.

Odumosu was part of Drogheda United's First Division title winning team team in 2020, and was shortlisted for the SSE Airtricity/Soccer Writers Ireland Goalkeeper of the Year award that season, he began his League of Ireland career with Dundalk U19s.

He remained at Head in the Game Park for Drogheda's return to the Premier Division, playing 31 games under Tim Clancy in 2021 before following the manager to Inchicore.

David has been called-up to the Republic of Ireland U21 squad a number of times, including for their European Championship play-off games against Israel in September.

The 21-year-old extended his contract at St Pat's in December 2022.