Tonight eirSport will broadcast a special documentary on Brian Kerr and the success he had at underage level with the Republic of Ireland.

It was a glorious era for Irish football and yet very few people know that much about it. With legendary coach Brian Kerr at the helm, those Irish squads of two decades ago included a number of burgeoning stars who later enjoyed long careers in the Premier League. But back then they were just young hopefuls taking their first tentative steps in the professional game as they took on the world'sbest and very nearly knocked them off their perch. In Europe, they battled with countries with far greater player and training resources than we could ever hope to have â€" and came out on top.

Stuttgart '88, Genoa '90, New Jersey '94 and Lille 2016. These are games that have passed into popular Irish folklore. They have become part of the national fabric. Everyone knows where they were when Ray Houghton put the ball in the English net or when Packie Bonner saved Daniel Timofte's penalty at Italia â€˜90, but no Irish team has matched what Brian Kerr's youngsters did in 1997 and '98. So how come so few people know about them?

It all began in the summer of 1997 and the FIFA World Youth Championships in Malaysia. The Irish team, which included Damien Duff, Neale Fenn, Glenn Crowe and Colin Hawkins, was coached by FAI technical director Brian Kerr who had made his name as manager and coach of St Patrick's Athletic. A few eyebrows were raised when he opted to include three League of Ireland players in his squad as well, among them Dessie Baker and Trevor Molloy, but it proved a good decision.

The tournament began badly with a 2-1 defeat to Ghana, but victory over the USA and a 1-1 draw with China were enough to see us through to the knock-out stages. A Duff goal in extra time gave us a 2-1 victory over Morocco in the round of 16 before a Molloy penalty secured a 1-0 win over Spain and a place in the semi-finals.

The team had already exceeded all expectations as they lined up against an Argentina side that included Riquelme and Aimar in its ranks and had beaten an England outfit with Michael Owen, Danny Murphy, Jamie Carragher, Kieron Dyer and other future stars in their ranks in the round of 16. But it was not to be for Ireland as the eventual tournament winners secured a 1-0 victory, although there was some consolation as they avenged their earlier defeat to Ghana with a 2-1 victory and third place overall in the tournament.

Things got even better the following year as Ireland achieved a remarkable double by being crowned European champions at both U-16 and U-18 level. The U16 squad included John O'Shea, Andy Reid, Liam Miller, Jonathan Douglas and Graham Barrett among its ranks and went unbeaten throughout the entire tournament in Scotland, eventually defeating Italy 2-1 in the final.

The U-18 side thrashed Croatia 5-2 in their opener in Cyprus before going down to an Alan Smith goal in a 1-0 defeat to England. But, with a squad that included Robbie Keane, Stephen McPhail, Richard Dunne, Liam George and Gary Doherty, they bounced back with a 3-0 win over the hosts to qualify for the final. There they faced a Germany side that boasted Sebastian Deisler and Thorsten Schramm in its line-up where they emerged victorious 4-3 on penalties after a last minute German equaliser had forced the game into extra time.

It was the most successful era in our football history and capped a truly remarkable achievement for Kerr and his charges. He also led Ireland to the World Youth Championships again in 1999, where they were eventually knocked out by hosts Nigeria on penalties in the quarter final. He did the same in 2003 before being named manager of the senior team the same year following Mick McCarthy's resignation.

'Kerr's Kids' tells the story of these heady times two decades on through the eyes of those who were there. Hosted by Kerr himself, there are heartfelt contributions from Damien Duff, Robbie Keane, Richard Dunne, Stephen McPhail, John O'Shea and many more, all of whom are quick to praise the pivotal role that Kerr played in their success.

We also hear from Irish Times football writers Emmet Malone and Ken Early and there is plenty of archive footage from both on and off the pitch to enjoy as well. It's a time capsule of a bygone era and a fascinating insight into how Kerr moulded a tightly-bonded squad of young hopefuls into genuine contenders for top honours. 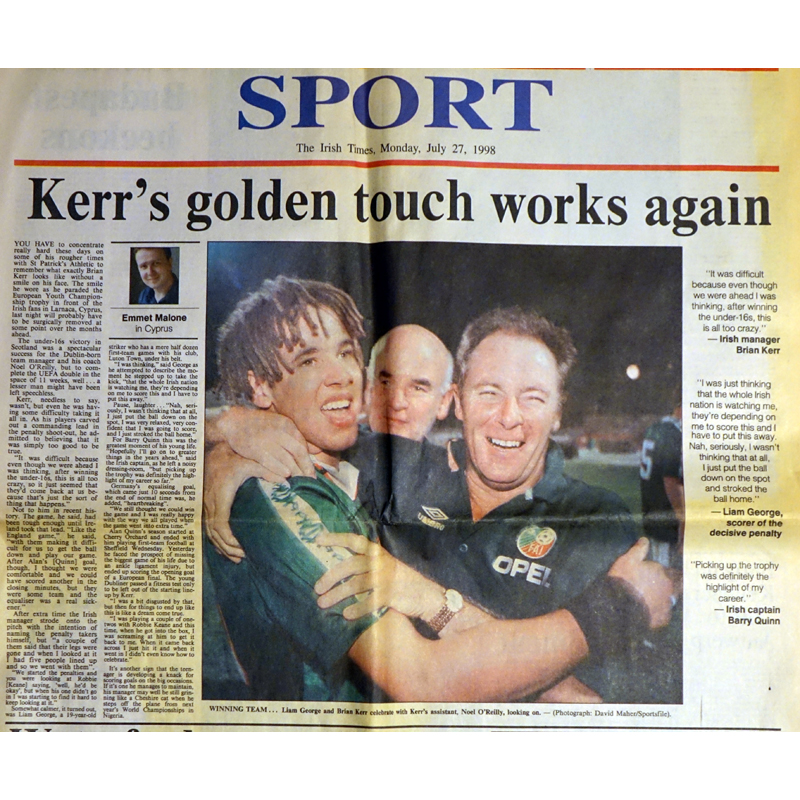