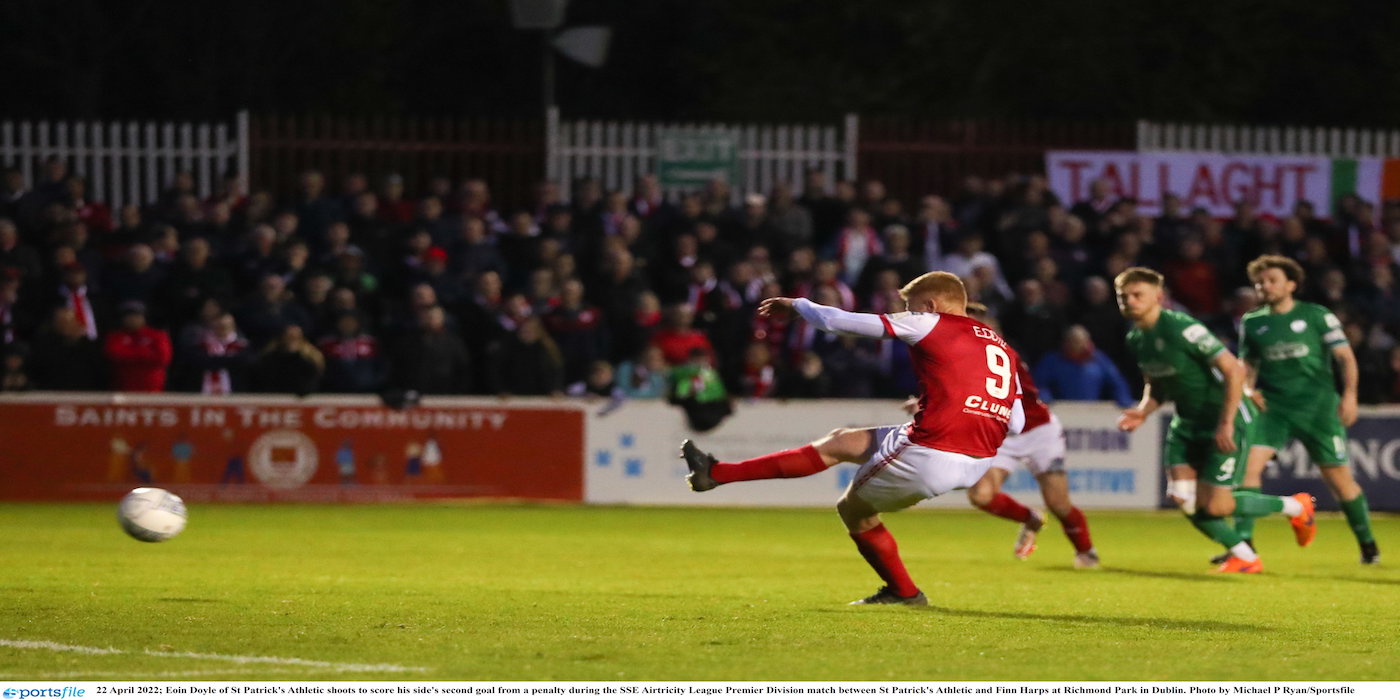 St Patrick's Athletic will host Finn Harps on Friday night in what will be the 4th and final meeting of the sides in 2022.

Kick-off is at 7.45pm, home tickets available from our website HERE right up to kick-off, or from the red ticket hut at the main turnstiles at Richmond Park from 6.45pm on Friday evening

The game will also be live on LOITV for a match pass of 7 Euro, with Oisin Langan and ex St Pat's, Drogheda United, Blackburn Rovers, Burnley, Preston and Ireland man Keith Treacy in the commentary box.

St Pat's come into the weekend in great form, having won their last three league games in a row.

Tim Clancy's men are 4th in the table, seven points ahead of 5th placed Sligo and now just four points behind Dundalk in 3rd and Derry City in 2nd, with nine matches left to play, including tomorrow's clash with Finn Harps.

After their European exit, The Saints have beaten Sligo Rovers (1-0), UCD AFC (2-1) and most recently Bohemians (3-1), Barry Cotter, Chris Forrester and Adam O'Reilly were on target in Monday's brilliant win at Dalymount Park.

St Pat's have won two and drawn one of the three matches against Harps so far this campaign.

They began with a 2-0 victory in Ballybofey in March thanks to goals from Jack Scott and Eoin Doyle, before a Doyle double helped secured the three points in a 2-0 win in Inchicore in April.

The last match between the sides was a 2-2 thriller at Finn Park in June.

St Pat's dominated much of the game and led 2-0 thanks to two from Billy King, but a great late comeback from Ollie Horgan's men saw them equalise in the 96th minute through Ethan Boyle to secure a valuable point in their relegation battle.

Harps sit 9th at the moment, in the relegation/promotion play-off spot, two points ahead of bottom side UCD.

Their last outing was a 3-2 win at home to Sligo two weeks ago, with Barry McNamee, Ryan Rainey and Ryan Connolly on target.

Manager Ollie Horgan was sent off in that game, meaning he'll be watching from the stands tomorrow night.

Manager Tim Clancy is looking forward to another big match in Inchicore:

"This will be our fourth and final meeting with Harps this season and it's one we are really looking forward to.

Finn Harps are a very good side. They consistently punch above their weight and Ollie has a special ability to pull out results in the closing round of games each season.

Both teams need the points for different reasons tonight and we expect a battle.

After getting a taste for European football, we are desperate to play on that stage again next season.

By winning our last three league games, we have done our ambitions a power of good.

The victory over Sligo was particularly pleasing as it came just a couple of days after the disappointment of going out of the Europa Conference League.

We followed that up with a solid 2-1 victory against a highly motivated UCD team.

Monday's victory against Bohemians was important for various reasons, not least because it was a Dublin derby and we all want to come out on top in a derby.

There was plenty to enthuse over in the performance at Dalymount Park, not least our energy levels, willingness to stick to the game plan and desire to get there first in 50-50 situations. We were good value for the win.

We have nine games remaining, and the target is to collect as many points as possible and hope that it secures a place in Europe.

Just four points separate Derry City in second and ourselves in fourth.

There is a lot to play for and a positive result will keep us right on track."

Team-news: Mark Doyle returns from suspension, Tom Grivosti is recovering well from a knock picked up in training last weekend while Adam Murphy (hamstring) is unavailable.

Tickets:Kick-off is at 7.45pm, home tickets available from our website HERE right up to kick-off, or from the red ticket hut at the main turnstiles at Richmond Park from 6.45pm on Friday evening

LOITV: The game will be live on LOITV with kick off at 7.45pm, LOITV match passes cost 7 Euro.