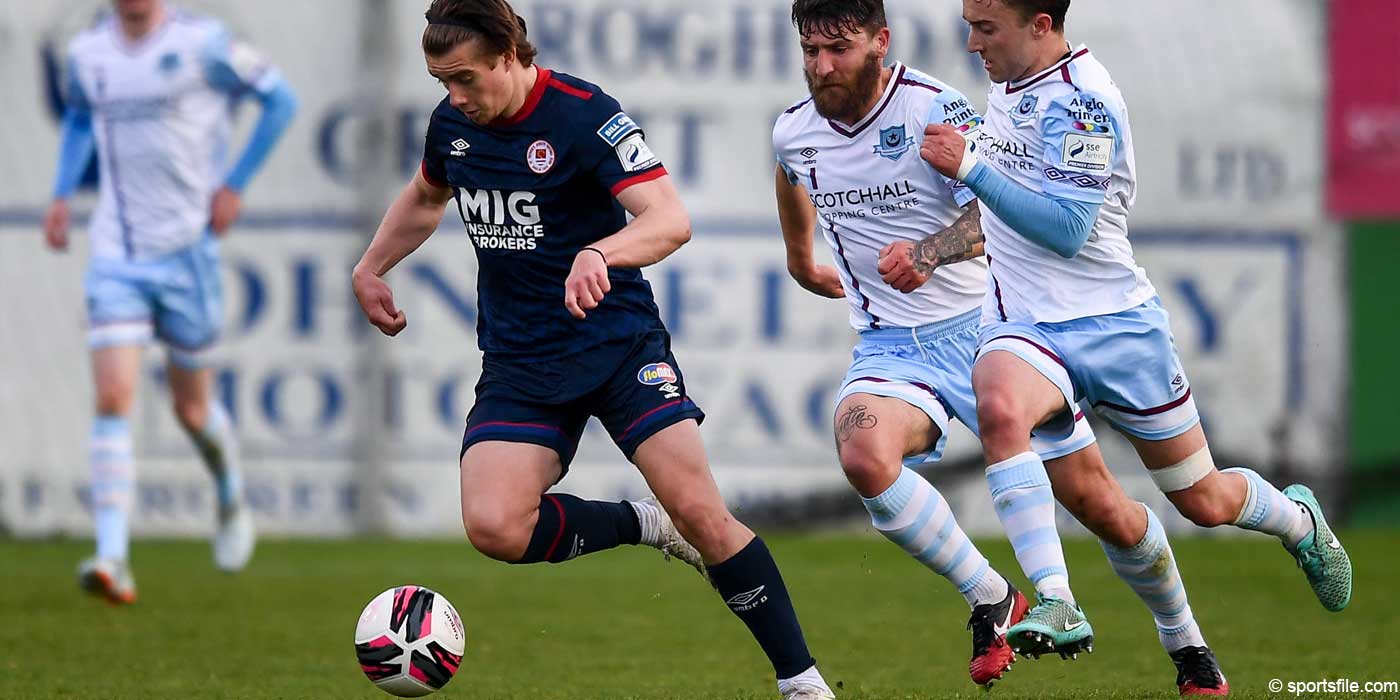 St Patrick's Athletic suffered defeat in the SSE Airtricity League on Friday evening as they fell to a 3-1 loss to Drogheda United.

Two first-half goals from Dane Massey and Mark Doyle had the home side 2-0 up at the break. Substitute Nahum Melvin-Lambert did hand St Pat's a lifeline when he slotted home his first goal for the club with 10 minutes to play, but Jordan Adeyemo wrapped up the three points in the 87th minute with a well taken goal on the counter attack to seal victory for Drogheda United.

St Pat's named an unchanged side from last week's defeat to Shamrock Rovers, with Paddy Barrett and Robbie Benson returning from injury to take their place on the substitute's bench.

The Saints did come under some early pressure, with Daniel O'Reilly going close on two occasions from free kicks which he met at the back post, but he was unable to direct his header towards goal as they sailed harmlessly wide.

It was 21 minutes in, when Drogheda United broke the deadlock. The Saints conceded a free kick 25 yards from goal. Dane Massey stood over it and he hit a stunning free kick to give Viteslav Jaros no chance in the St Pat's goal and give Drogheda United the lead.

Drogheda looked as if they would carry a one goal lead into the break, but on 44 minutes, they doubled their lead. Mark Doyle found some luck when the ball ricocheted back to him on the edge of the area and he unleashed a rocket which flew past Jaros to gift Drogheda a two-goal lead at the break.

St Pat's started the brightest of the two teams in the second half as they looked to claw their way back into the game. Billy King's corner on the 57th minute mark found Sam Bone who rose highest in the Drogheda box, but David Odumosu was alert to save the towering header.

Two minutes later, Odumosu was called into action again when King's long-range effort almost snook into the corner, but the Drogheda shot stopper got down well to save, as The Saints upped the ante considerably.

Ben McCormack replaced Sam Bone with 20 minutes left to play, and they resorted to a back three, as they searched for a way back into the game.

Smith did have a half chance when his shot from a tight angle flew into the side netting before Chris Forrester's deflected free kick sailed just over the crossbar as the game entered the final quarter.

With 10 minutes left to play, The Saints were handed a lifeline. A well worked move from found it's way to the feet of Nahum Melvin-Lambert, who did excellently to create space for a shot and he slotted home for his first goal for the club, and reduce the deficit to just one, with 80 minutes played.

However, hopes of a comeback were short lived and in the 87th minute, Drogheda United went two in front again. James Brown's shot was well blocked by Lee Desmond, and the rebound fell kindly to second half substitute Jordan Adeyemo on the edge of the area, who buried the ball to the net.

The Saints threw everything at the game in the dying minutes but were unable to find a way past a stubborn Drogheda defence, as they held on to take all three points.

Next up for St Pat's is a crucial Dublin derby game next weekend against Bohemians at Richmond on Friday evening.