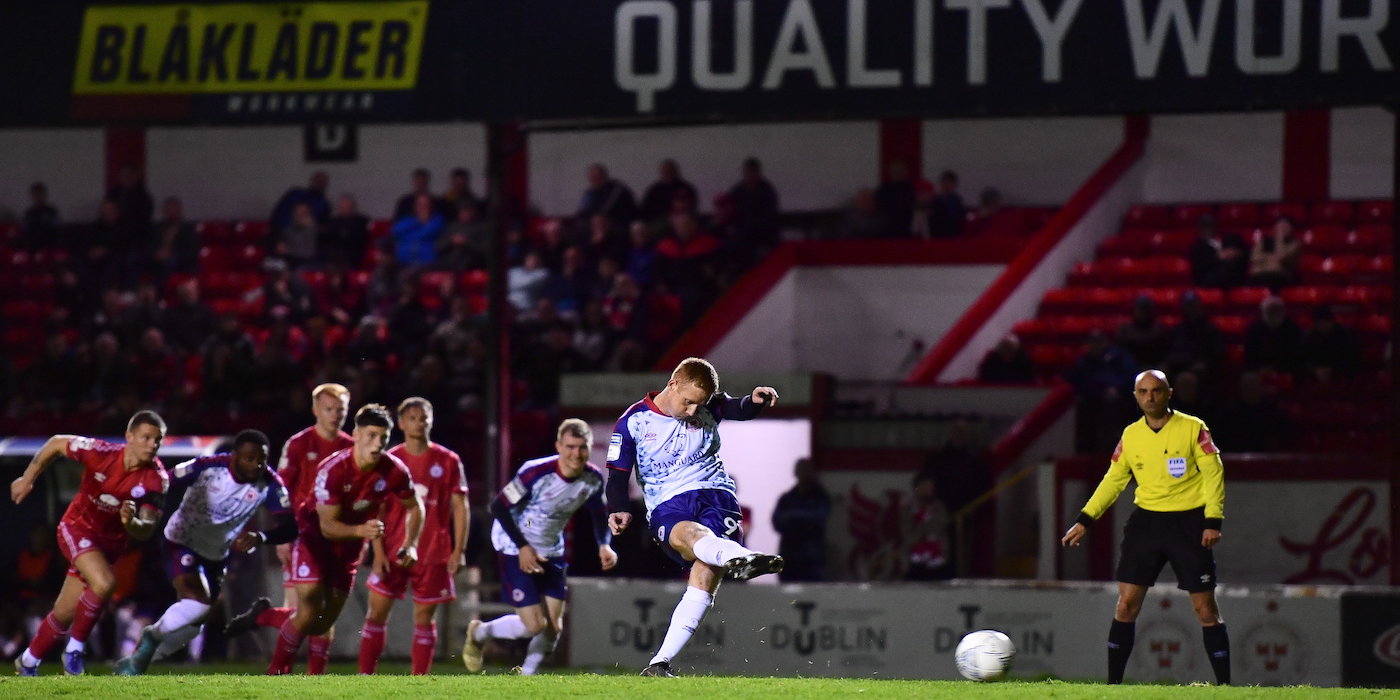 St Patrick's Athletic and Shelbourne played out one of the games of the season under lights at Tolka Park on Monday night.

Eight goals in total, three penalties, three disallowed goals, nine yellow cards, one red and lots more were packed into the an incredible 90 minutes in Drumcondra.

The Saints had to work hard to come back from 1-0, 2-1 and 4-2 down to secure a point which means they are four points behind Dundalk in 3rd, who they play on Friday, and ten points above 5th placed Bohemians.

Top scorer Eoin Doyle netted two second-half penalties to bring them level in the end, with Barry Cotter and a Sean Boyd own goal twice bringing Pat's back into the game after falling behind in the opening 45.

Cotter almost won it for The Saints six minutes from time when his free kick rattled back off the post, but in the end they had to settle for the draw after a pulsating game of football.

It was ideal conditions for football on Dublin's Northside and both sets of fans made plenty of noise at the start with a large number of away supporters making the trip across the Liffey, 850 St Pat's fans packed into another sold-out away end.

After a quiet opening 10 minutes, the game sprung into life and it was the hosts who took the lead through Boyd.

Shane Griffin's long diagonal ball was aimed for Shane Farrell, who looked like he was possibly offside, the ball ended up at the feet of Boyd who buried it low to the net to open proceedings.

Shels gained the momentum and just four minutes later, they almost added a second, with Farrell's quick free kick calling St Pat's goalkeeper Danny Rogers into action at his near post to palm the shot away for a corner. The resultant corner was whipped into the box and Boyd rose dangerously, but he didn't connect properly as his header inside the six yard box as trickled harmlessly out to the left and was eventually cleared by Jay McClelland.

After a frantic five minute period, The Saints settled well into the game and they were level on the 20 minute mark.

Joe Redmond's pin point cross-field pass fell right into the path of Barry Cotter down the right wing. Cotter raced towards the by-line and just as it looked as if the angle was too tight, he cut back in before unleashing a low shot to the far corner with his left foot, giving the Saints the equaliser.

Seven minutes later, Shels fired themselves back into the ascendancy and it was former Saint Matty Smith. He picked the ball up 30 yards from goal before turning and firing a cracker into the top corner.

It was all action in an extremely entertaining and enjoyable first-half and Mark Doyle thought he had equalised when he headed home 36 minutes in, but he was adjudged to have fouled in the build up and so referee Neil Doyle disallowed the header, St Pat's will feel it should have been allowed.

Just as it looked as if Shels would take the lead into the break, the away side equalised.

Eoin Doyle's header at the near post from a corner rattled off of the crossbar and there was a goal-line scramble with the ball eventually headed into his own net by Sean Boyd.

The goal proved to be the final action of a pulsating first 45 minutes with four goals in total.

Upon the resumption of play, there was no let up in action and five minutes into the half, Shelbourne took the lead once again.

John Ross Wilson did well down the right and he delivered a dangerous ball into the area. Boyd was quickest to react and he got a touch on it before Brockbank took him down and referee Doyle pointed to the spot for a penalty. Boyd took it himself and scored to to nudge his side ahead again.

It was end to end stuff and St Pat's thought they had equalised once again when Eoin Doyle raced through and slotted the ball beyond Brendan Clarke, but he was ruled offside in what must have been a very narrow call for the Assistant Referee.

Nine minutes later, it was Shels' turn to have a goal disallowed when Joe Redmond's attempted clearance hit off Matty Smith's hand and floated over Rogers into the net, only to be disallowed for handball.

Three minutes after Smith's disallowed goal, the home side did double their advantage.

Wilson did well down the right again and Adam O'Reilly's clearance fell to JJ Lunney on the edge of the six yard box and he dispatched the ball to the net to give Shelbourne a 4-2 lead with an excellent finish.

St Pat's never gave in and they pulled one back just before the 70' mark when Sam Curtis was brought down in the penalty area after brilliant play by the 16-year-old.

Doyle stepped up and he calmly sent Clarke the wrong way as he placed the ball to the bottom right corner to make it 4-3.

This game had everything and The Saints dug deep and were rewarded for their hard work when Shane Griffin brought Doyle down in the penalty area as Neil Doyle pointed to the penalty spot for the third time of the night.

Doyle scored again to level things up for the third time in the game, scoring his 12th league goal in the process.

It was a frantic ending, as both sides desperately looked for a winner and it was end to end.

Cotter came closest to finding a winner when his free kick cannoned back off the post six minutes from time with Smith did have a chance for Shels when he was found unmarked in the box but he was unable to direct his shot goal-wards as it strayed wide of the post.

Either side could have found a winner in the closing stages with chances at either end, but in the end it finished all square in one of the most entertaining and dramatic games in League of Ireland history.

Next up for St Pat's is a crucial away trip to Dundalk on Friday evening in a crucial match in the race for Europe, with kick off at 7.45pm at Casey's Park.